The making of a 21st Century (organic) brewery

Community, organic and sustainability are three words that aptly summarise the core values of Stroud Brewery.

The brewery was established back in 2006, in the intervening years it has outgrown two brewery units, moving into a beautiful new brewery with room to expand and a smart new bar at the beginning of 2019.

Their commitment to sustainability and community directly supported expansion. Firstly, by accessing funding from the EU via the Rural Development Fund, as a small rural business adding value to primary agricultural production. Then crowdfunding twice to raise funds for new premises, the second time, meeting their £300k target within a week.

Community
Founder, Greg Pilley, “The reason we brew great beers is because we like drinking them with other people. When you come into the bar its busy, that’s what excites us, that we’ve a business and a venue that supports other like-minded businesses like  Warminster Maltings, which supplies our organic barley. The bar brings people together, whether it’s meeting up or bumping into neighbours, seeing friends, making new friends and spending time with family, our bar and our business is bringing the community together over good (organic) beer.”

Organic
On organic Greg says “It isn’t just about making great beer, though that’s part of it. We know that organic standards are best for making high quality products and barley malt is our biggest external input so has the biggest environmental impact, it follows that we would use organic malt.

In terms of positive environmental impact, some researchers would argue that, with greater mechanical weed control, organic farming can create a bit more carbon. However, this doesn’t take into account ‘upstream and downstream consequences’, the use of pesticides and fertilisers which are made using petrochemicals, the need to clean pesticides from water and long-term effect of these on public health.”

Sustainability
Greg’s sees the way forward as we face global challenges, changing from an economic model of continual growth at a cost to society and environment, involves people moving away from consumerism and valuing their experiences and their connection with friends and communities.

“Sustainability is one of the values which people are beginning to understand, and a key influence we can have on the planet, as consumers, is how we spend our money. The hope is that when people are shopping, they consider additional value such as if products are produced sustainably.

Collaboration
Earlier this year the brewery teamed up with Hobbs House Bakery, using their unsold bread to produce Flour Power Beer, a collaboration with the brand TOAST, in support of Friends of the Earth.

They have also been working with River Cottage on a partnership which started with a brewery visit from River Cottage chefs, Tim Maddams and Steven Lamb who then devised beer pairings sessions at the brewery launch earlier this year. There are future plans to work together which are for now, firmly under wraps.

In the meantime, Stroud Brewery will be hosting a pairing of their beers with an organic menu created by Tim Maddams and Steven Lamb from River Cottage on their Culinary Flavour Voyage on 24 July.

Organic brewing in a changing landscape
Not long after the brewery was established in 2006 the crash of 2008 which could have been a worry, however, the brewery saw their business double. “We diversified, starting to sell directly to the public and bottling beer. Those pubs that were struggling found their local real ales sold well, as people became more interested in local produce and more sensitised to the local economy. As a small brewery with a local identity, we got a lot of support. We’ve also found that when people have less money, they can be more discerning about how they spend it.”

In 2002 Gordon Brown halved the duty paid by small independent breweries, this led to a renaissance in  brewing. It got people interested in quality, artisan products, leading to a burgeoning creativity in the brewing sector. The changes in buying habits as a result of the crash, further increased sales in the independent brewing sector.

Greg says “There’s never been a better time to be a beer drinker, there’s so much choice, quality and it’s a competitive market so prices get driven down. Which isn’t necessarily a good thing for truly independent brewers whose product is rooted in quality and provenance.”

As an organic, ethical business the key driver is not profit, but rather positive impact on environment and community but it still has to be a viable, thriving business. They recently achieved B Corp certification which ensures they adhere to ethical standards. So, margins are lower, the team works harder, and motivation comes from the heart rather than a desire to just make more money.

Selling organic beer
As an organic brewer, communicating the big picture of organic, community and the connection with the landscape to landlords is a challenge. Trying to sell what could be seen as a premium brand, without being able to tell the story behind it has been a barrier in the pub sector.

As a result, pubs and bars outside of the local region with no commitment to organic and sustainability are not yet big customers, but Greg is optimistic saying things are changing..

Flagship customers championing organic like Gheetie Singh’s Duke of Cambridge and the Wheatsheaf at Chiltern Foliat where sustainability and relationships with suppliers’ matters, helps to show what can be done and wins support.

While it may take a little longer for other pubs to commit to and learn to communicate all the benefits of organic to their customers, Stroud are doing very well creating an inspiring business. Their biggest customer is their own bar (selling 20% of their own production). They also sell to local Gloucestershire pubs, online via Vintage Roots, to trade via CLF wholesale, via independent retailers and on the Stroud Brewery website. 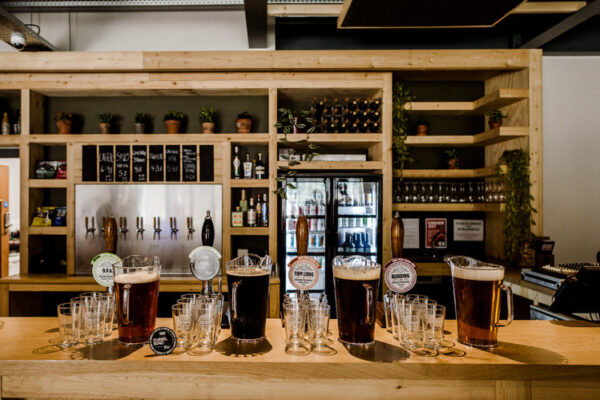 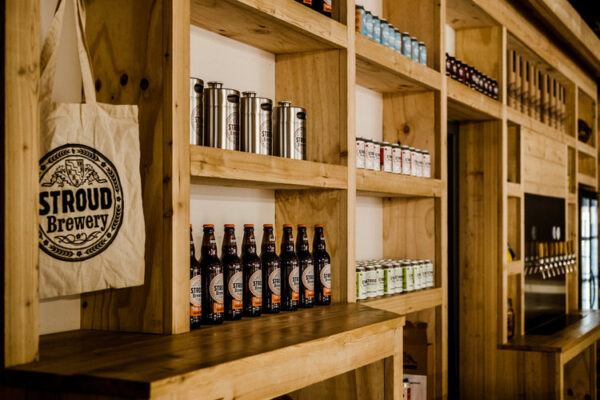 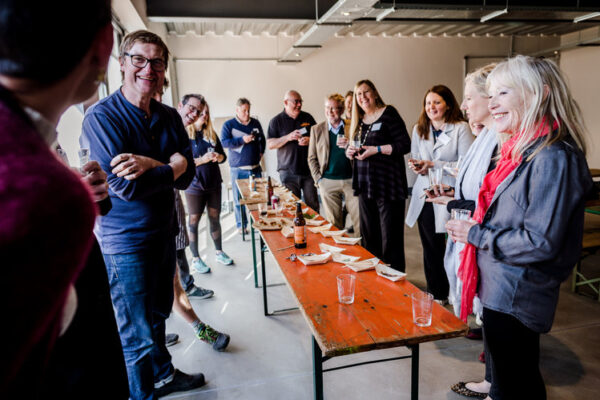 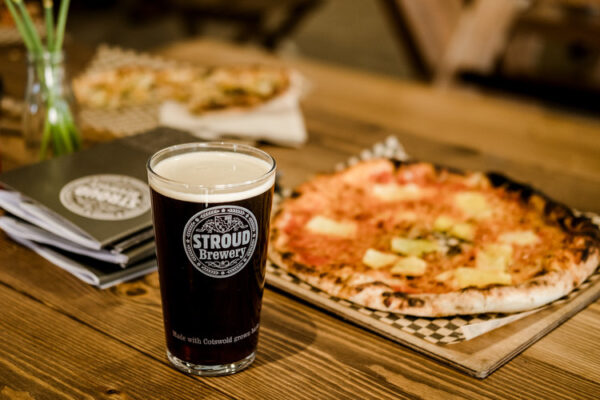 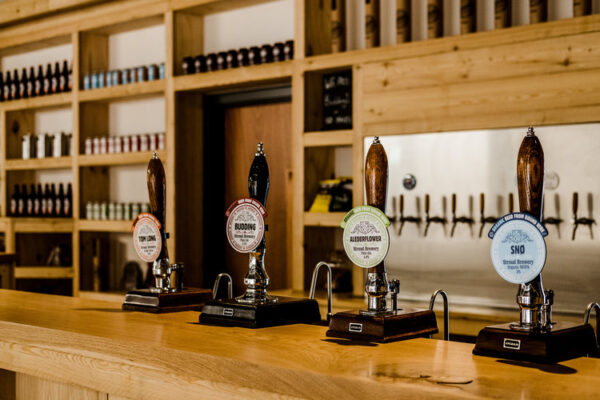 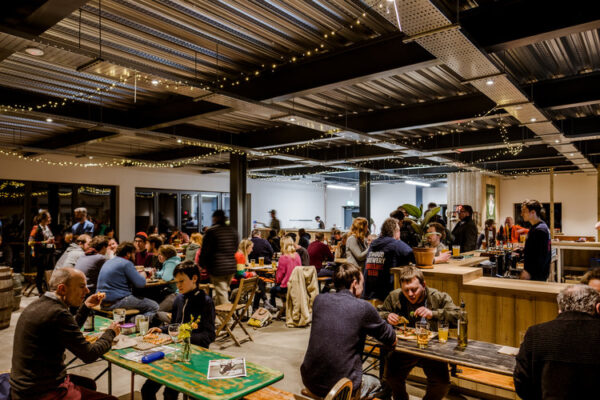 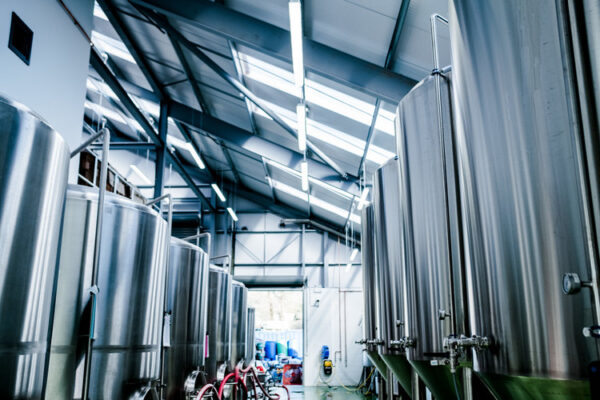